Enjoy the Cape Town sun, get your body in shape and meet new people through our BeachBums beach volleyball classes. Our coaches will introduce you to the basics and technical aspects of this highly entertaining sport. Check below what will suit you best and sign up! 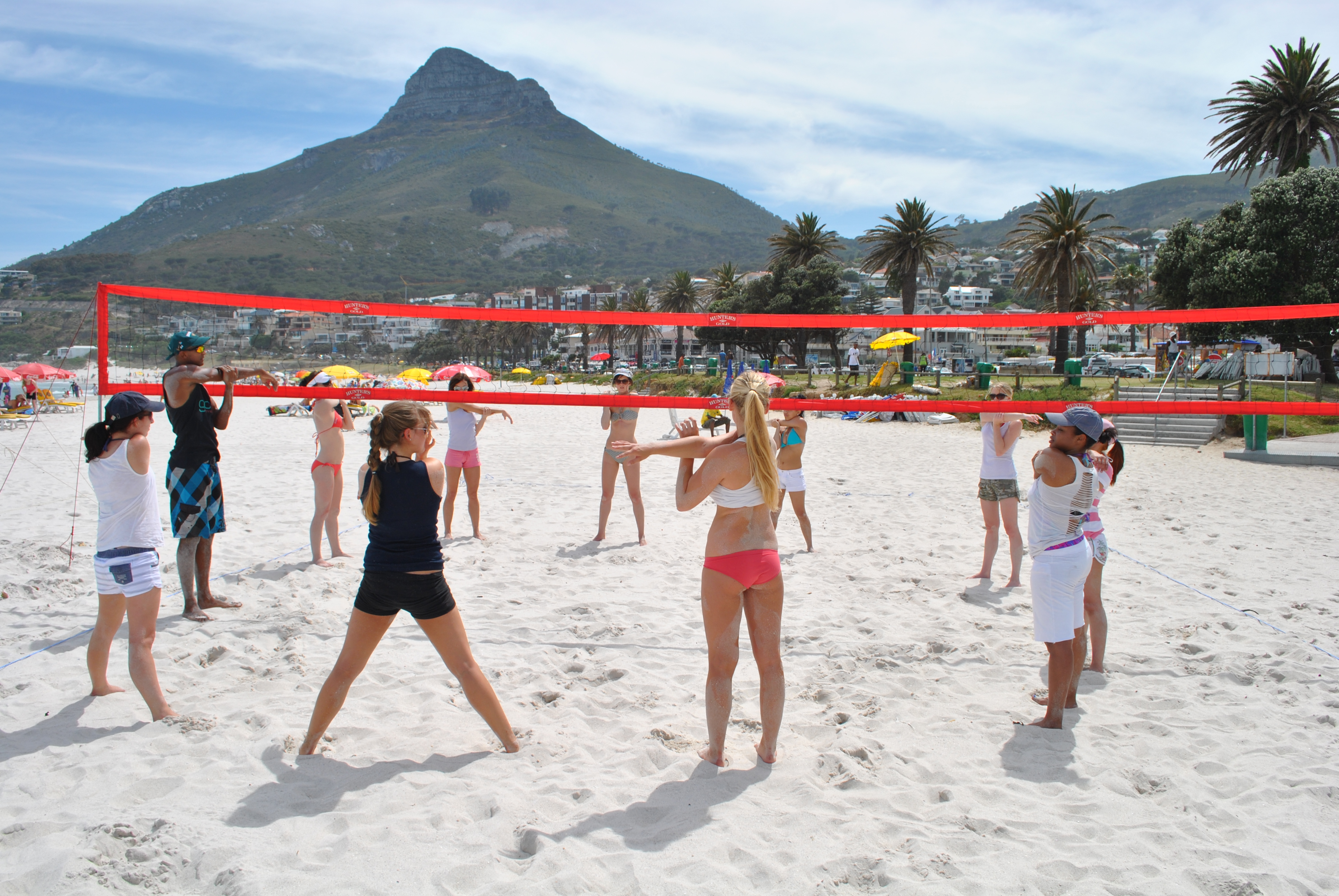 Rules of the Game

Two players on a team
Unlike indoor volleyball, beach volleyball teams consist of two players. This means MOVEMENT is very important to make sure the whole court is covered. Players usually choose a partner with a complementary but opposite skill set. A player who is tall and a good hitter, will likely go for a partner who is quick in the backcourt and a good passer.

3 touches per side
Each team is allowed a maximum of three contacts before the ball must go over the net. The preferred sequence is a dig (an underarm pass made with the forearms), followed by a set (an overhead pass with the hands), and then an attack (overhead one-handed hit directed over the net and towards the opponent).

You cannot touch the ball twice or let the ball come to a rest during contact
No player is allowed to hit the ball multiple times in row. Also, you can’t contact the ball for a prolonged amount of time. Players are not allowed to carry, palm or throw the ball. Only ‘hard’ contact is allowed.

The net is off-limits
No part of a player’s body or uniform is allowed to touch the net. However, you are permitted to play the ball out of the net. It is also allowed to cross under the net as long it does not interfere with an opponent’s attempt to play the ball.

Game Play
Beach volleyball matches are broken up into individual sets. Matches are made up of three sets and a team must win two of the sets in order to win the match. The referee will toss before the match to decide which team has first choice to serve or to receive the serve.

The first team to 21 points wins the set. If both teams won one set, the third game—which always acts as a tie breaker—is played to 15 points. Like the first two games of the match, a team must acquire at least a two point advantage to win the tie breaker. Whenever the combined score of the two teams is a multiple of 7, teams will switch sides. A specific side can be beneficial in case of a strong wind or sun.

Substitutions
Unlike indoor volleyball, beach volleyball rules do not allow substitutions. If a player is injured during a match and unable to play, his/her team must unfortunately forfeit.

The Skills
There are five fundamental skills in beach volleyball: serving, passing, setting, blocking, and hitting. Below follows a description of the skills and the rules:

Serving
Every point starts by a serve. While there are several different serving techniques—the underhand serve, float serve and jump serve —the objective is always the same: send the ball over the net and into the opponent’s court. The server must contact the ball behind the base line and the serve may touch the net as long as it passes over to the opponent’s side. If the server cannot get the ball over the net, a point is awarded to the other team.

Passing
The pass is a method of receiving an opponent’s serve and/or overhand attack. The proper technique for the forearm pass requires the passer to join the forearms together at waist level to form a platform with which to direct the ball to the desired target. The BeachBums coaches will teach you to always try and pass to the middle of the court, about 1 meter from the net.

Setting
The goal of setting is to position the ball in the air so that a teammate is able to hit the ball. The overhand technique / volley – contacting the ball above the head with two hands simultaneously — is mostly used in indoor volleyball. Because there are a lot of strict rules for the overhand set in beach volleyball, players mostly use an underarm technique to set the ball.

Blocking
A block is an attempt to stop an opponent’s attack by jumping with both hands overhead to create a barrier at the net. Professionals will use codes to indicate which side of the court they are blocking, either balls that go line or balls that go cross court.

Hitting
The attack usually takes place on a team’s third and final contact. The goal is to down the ball on the other team’s side of the court. To have a better chance of a hard spike and/or to avoid the opponents block, it is important to jump when attacking the ball. The hit must be a ‘hard’ contact with the ball.

BeachBums King and Queen of the Beach

Jerome Fredericks | Tournaments | No Comments
There was a time when beach volleyball was a statement on Camps Bay beach. When you had to line your a flip flop in the sand to book a game.…

Jerome Fredericks | Youth Development | No Comments
March and April 2016, Staging 2 Youth Development events in aid of growing the game of volleyball in the Western Cape. The first event will see youths from all…